Click the services and programmes to view more details 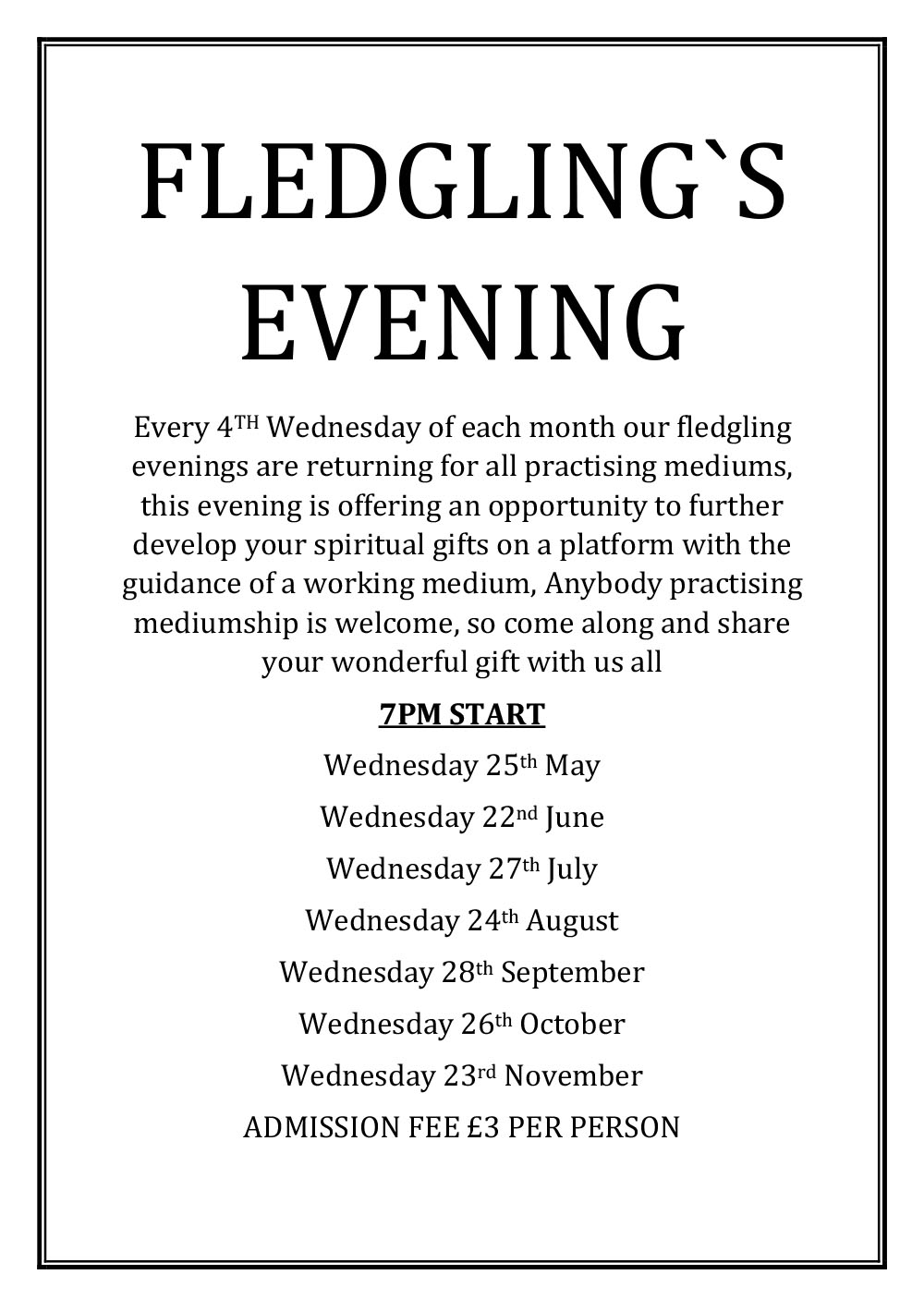 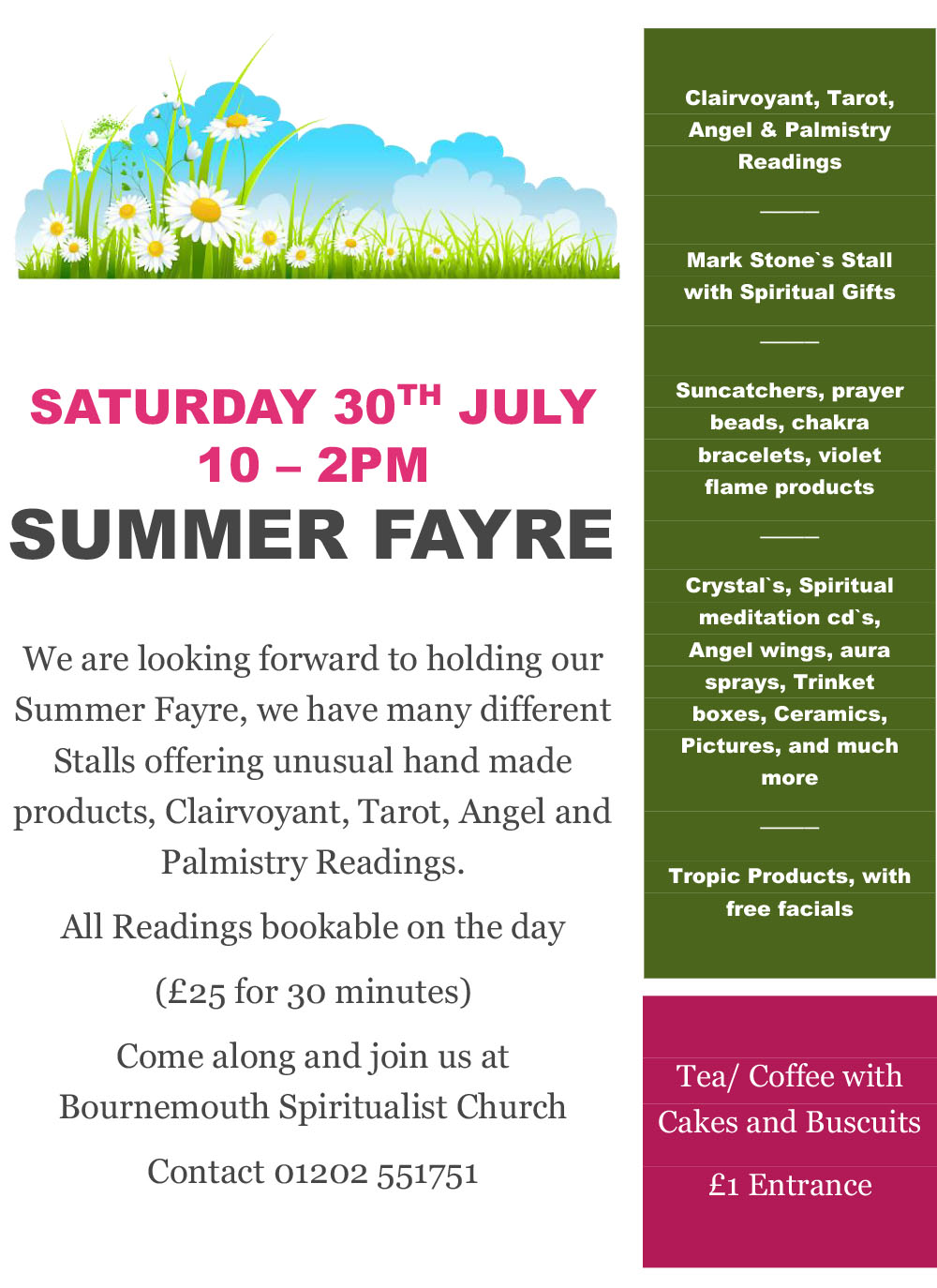 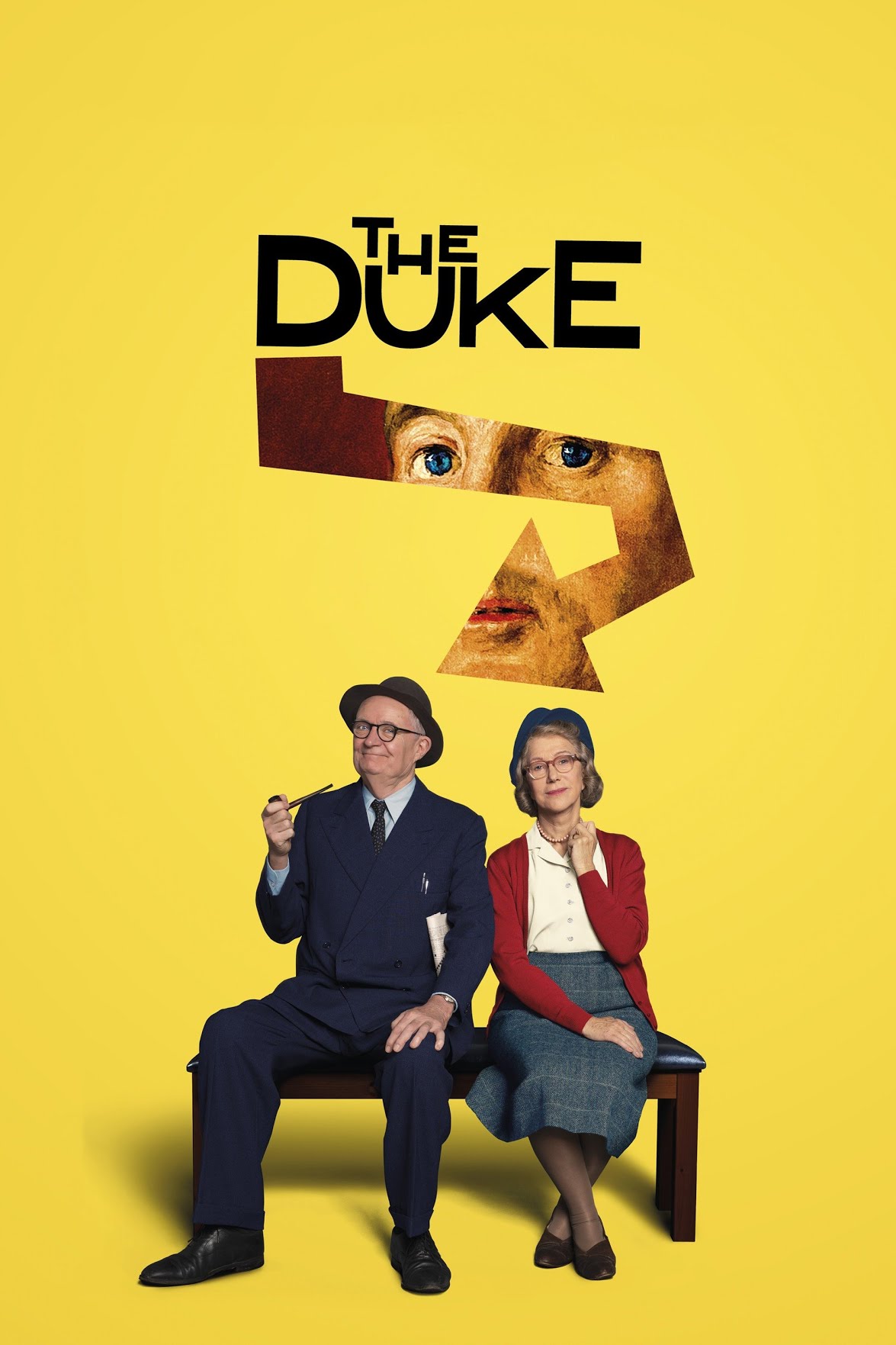 On this website you will find our programme of events, including services and healing sessions, details of church officers and committee members, information about our library, background information on Spiritualism, photos of our church and how to find and contact us. The contact page also includes links to the website of the Spiritualists’ National Union and other local Spiritualist churches.

Services are held Thursday 3pm and Sunday 10.45am every Sunday and the first Sunday of every month we have an additional service at 6.30pm.

Demonstrations of mediumship. On Tuesday evenings Open Circles are held.

There are themed meetings on Meditation (1st Wednesday), Philosophy (2nd Wednesday) and on the 4th Wednesday of the month there is an Open Platform to which everyone is welcome.

Healing takes placve at specific times throughout the week. For times and details see the “Healing page

Our Church holds two services a week. Thursday Service Demonstration of Mediumship Service begins at 3pm Refreshments after the service Sunday Service Divine Service Service begins at 10.45 We hold an additional Services on the first Sunday of each month 6.30pm Refreshments after the evening service All are welcome to attend any of our services, free will offerings are collected after each service to raise money for our Church. We look forward to having you join us

Contact healing is taking place in a limited way under new SNU guidelines. Please DO NOT ATTEND for healing if you have any symptoms which might be Covid or have recently been in close contact with anyone who has tested positive. Many Thanks. Healing times are as follows: Sunday 10.00am - 10.30am Monday 2.00pm - 4.OOpm Thursday 6.30pm - 8.00pm Friday 10.30am - 12.30pm For those of you who prefer not to attend in person, members of our healing team will continue to send absent healing regularly through the week. If you would like to add any names to the list for healing, please click below.

A Short History of the Church

At the beginning of last century, around 1904, a Mr John Walker and three friends - Mr F S Blake and two brothers, Percy and William Street, started a development circle with the leader and medium being John Walker. He was a good trance and physical medium, and sometimes, this physical power was very dominant. Objects were moved about at the request of the sitters, causing a lot of interest and at times, amusement.

This went on for some time until one night, a Spirit Control came through their leader and said, “Well boys, you’ve had your fun, now you must get down to serious work.” He gave them to understand that they were to help lay the foundations for a church, which was to be under the control of a band of workers from the spirit side of life. They were to be used as the mouthpiece through whom they hoped to pass to earth, some of the knowledge they had acquired.

When they had developed far enough, they started meetings in a small studio now occupied by the Charminster Road Post Office.

The Society was opened in 1905. They shortly moved to premises in what was then called Town Hall Avenue, where the Sunday services were held in a café. It was here that Vincent N. Turvey, an author, did so much work. Some time later a Mr Hiscock and a Mrs Hayter, who had been members for some time, opened the church which is still doing good work in Charminster Road today.

The Membership was now steadily growing. After various changes, we settled for a time in the Wilberforce Halls, Holdenhurst Road, and here we started to form ourselves into a church, allying ourselves with the Spiritualists’ National Union. Rules were formed and an organised Council and membership established. On leaving Wilberforce Hall in 1920-1921, we went to the Theosophical Rooms in Lansdowne Road.

We had now been wandering about for some time, and at a committee meeting we arranged that the committee members were to search and visit all premises, which might prove suitable. 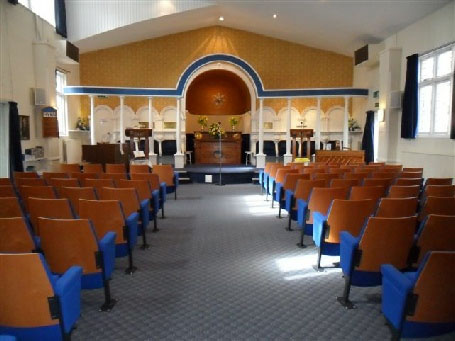 After some time, the President, found the house known as Streate Place, which had been a doctor’s house and had a waiting room and surgery on the Bath Road entrance. Having been purchased by the Misses Wadlow for the sum of £6,000 and presented to the Bournemouth National Spiritualist Church, Streate place was used as a hall, library and healing sanctuary. The surgery and waiting room part of the building was converted for use as a church. On 5th June 1924 Mr Ernest Oaten, who was then the Editor of the “Two Worlds” magazine, officially opened the Church. Mr Frank Blake became resident minister Mr Frank Bessant took his place as President.

By 1956 the church building was beginning to perish along with ventilation and acoustic issues. A building fund was set up, as a complete re- design of the entire church was needed. This included raising the roof level, adding dormer windows, stained glass windows and the addition of a tower and spire and pipe organ. This was designed by John Austin and partners and completed by building contractors Daws Ltd. The church had been transformed into what was described as “a new landmark for Bournemouth”.

In 1988 it was decided to sell the adjoining Streate place and the rear half of the church was converted into a hall with folding partition doors. This meant the removal of the pipe organ to make way for a kitchen. A new side extension was constructed to house an entrance lobby, cloakrooms and a library in the form we can see today.

Commencing in 2010 the church has seen further refurbishment. This has included new fixed seating, outside paving and alterations to the platform. The kitchen and toilet areas have been refurbished and the re-decoration of the church. It is hoped this beautiful church will be preserved for many years to come. 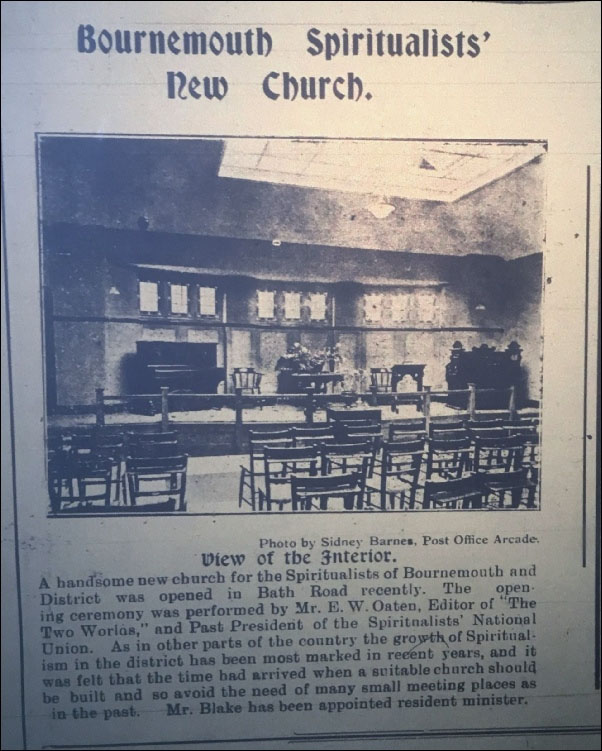 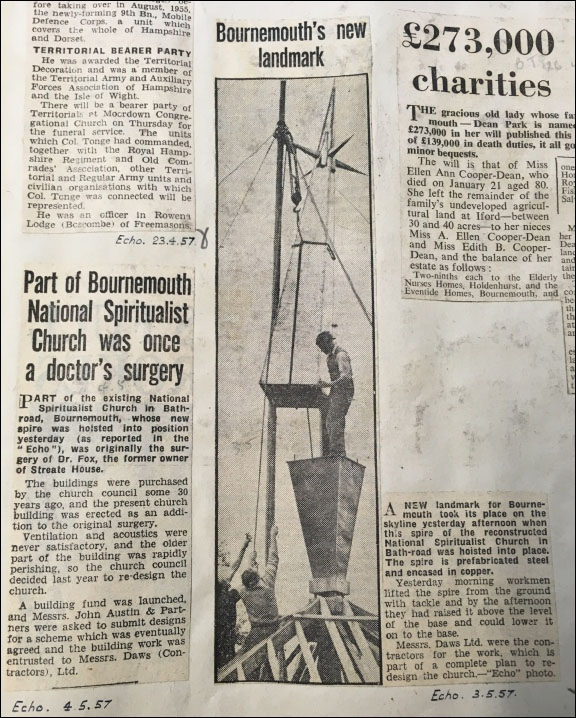 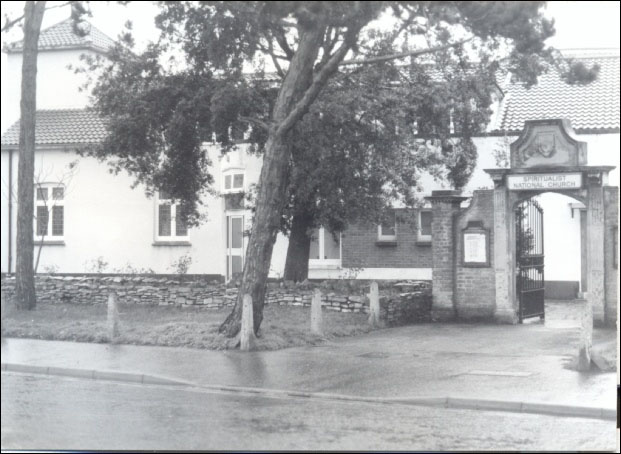 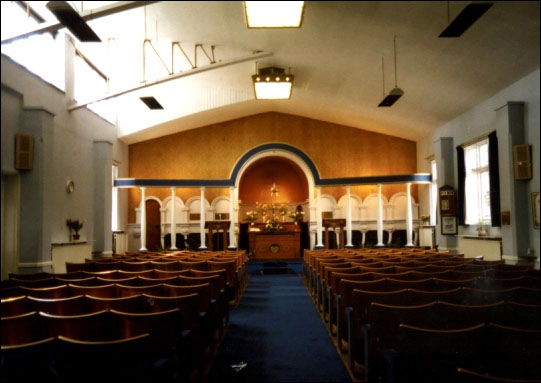 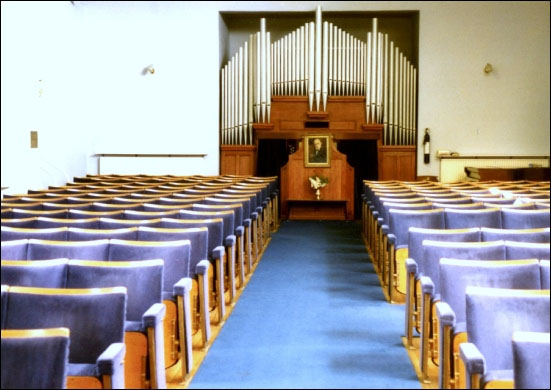